You are here: Home / MidEastGulf / Iraq: over 18,000 children recruited by Islamic State 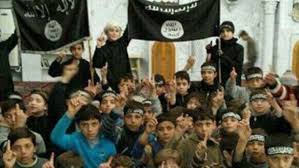 Number of children who were recruited by the Islamic State fighters in Mosul have exceeded 18,000, according to a senior security source. Many of them resorted to refugee camps with their families, like reported by iraqinews.com .

Speaking to Al-Ghad Press on Thursday, the source said that IS recruited more than 18,000 children below the age of 18 years old through mobilization of the school students.

Security troops obtained the full names of those recruited by IS, he said, adding that university students were forcibly divided among different specializations that serve IS purposes in Mosul.

“The security committee in charge of reviewing the situation in Mosul revealed that thousands of recruited children are there among displaced families,” he said indicating follow up on them to seeking rehabilitation in coordination with religious endowments and education ministries.

IS recruits children to carry out terrorist and suicide attacks.

Iraqi Observatory for Human Rights reported earlier this week that 197 children have been taken hostage by the IS militants near al-Nouri Grand Mosque in west Mosul where the Iraqi troops have closed in on the militant group.

Mosul is the Islamic State’s strongest stronghold in Iraq. Eastern Mosul was recaptured from IS in January, after a US-backed offensive was launched in October. A new offensive started in February to retake the west.