You are here: Home / MidEastGulf / Iraq: over 100 Daesh militants killed in Mosul airstrikes 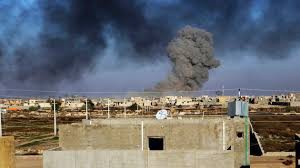 At least 100 Daesh militants have been killed in the two-day airstrikes in Iraq’s Mosul city, according to the Iraqi Army.

The Iraqi Army on Sunday tweeted that international airstrikes targeted key Daesh militants at various locations in the city, including Mosul University.

According to them, there were no students inside the university and the army also claimed that the varsity’s building is being used for training purposes.

Meanwhile, CNN reports that it has confirmed the strikes, the first with someone inside the Mosul University and the other with the former governor Athil Al Nujayfi of Nineveh Province in which Mosul is located.

Nujayfi said that 17 senior Daesh fighters and numerous locals were killed in the strikes.