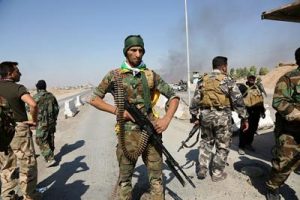 Members of Kirkuk Mobilization Forces were injured during an ISIS attack in al- Rashad area, like reported by shafaaq.com.

The Security Media Cell said in a statement that the fourth regiment in Kirkuk Mobilization Forces responded to ISIS terrorist gangs in al-Asriya village area in al- Rashad sub-district, and this attack resulted in the injury of 4 fighters of the regiment.

On Tuesday evening, ISIS attacked a village in Dibis district in Kirkuk, and opened fire on the people, killing four people and wounding others.

According to a security source, all the victims are of Kurdish nationalism.

The attacks of suspected ISIS militants have increased in the past few months, especially in the governorates of Kirkuk, Salahuddin and Diyala.

In 2017, Iraq declared victory over ISIS by reclaiming its entire territory, which was estimated to be about a third of the country’s area invaded by the organization in the summer of 2014, but the organization still maintains sleeper cells in large areas of Iraq and launches attacks in varying periods.