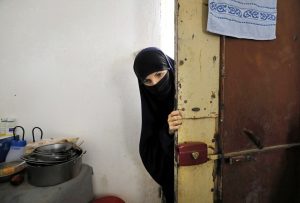 Iraqi authorities said they’re negotiating with the embassies of foreign nations to facilitate the return of 1,400 family members of Islamic State (IS) fighters who surrendered to Kurdish forces, like reported by kurdistan24.net.

The families, consisting of women and children, surrendered to Peshmerga forces at the end of August following the offensive against the militant group in Tal Afar, west of Mosul.

Iraqi army and intelligence officers said most of the foreigners are from Turkey, Central Asia, and former Soviet states such as Tajikistan, Azerbaijan, and Russia.

The women and children are currently being held in a displaced person camp in the Nineveh Province, south of Mosul.

One intelligence officer told Reuters Iraqi authorities were still trying to verify the identities and nationalities of the women, many of whom no longer have their original documents.

“We are holding the [IS] families under tight security measures and waiting for government orders on how to deal with them,” he said.

“They are families of tough criminals who killed innocents in cold blood, but when we interrogated them we discovered that almost all of them were misled by a vicious [IS] propaganda,” Taie added.

According to some of the women, the fate of their husbands who surrendered to Kurdish Peshmerga forces separately is unknown.

Brigadier General Kamel Harki, a Kurdish commander, said some of the captured militants were handed over to Iraqi authorities while others were killed for trying to attack Peshmerga forces during their surrender.

Despite Iraq eager to negotiate with embassies on the return of the women and children, some nations, such as France, prefer citizens found guilty of affiliation with IS to be prosecuted in Iraq.

It is unclear what the status of foreign-born fighter and their families would be under Iraqi law and whether they would be extradited back to their home countries for prosecution.