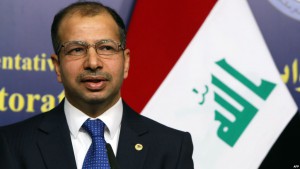 The Parliament Speaker, Salim al-Jubouri informed the ambassadors of the United States and France that Iraq needs more international support in its war being waged against ISIS terrorist organization.

According to a statement issued by the Presidency of the parliament on Tuesday , al-Jubouri met in his office official on Monday, the US ambassador to Iraq, Mr. Stuart Jones.

The statement added that during the meeting , they reviewed developments in the political scene , discussed developments in the war against ISIS terrorists , means of coordination with the international coalition to sustain the momentum , resolve the battle, and the price of sovereignty and the role of the United States support for Iraq, stressing the importance of strengthening international support for Iraq during the current stage and at all levels.

On the other hand , with al-Jubouri met in his office yesterday evening , Marc Baretti , France’s ambassador to Iraq, according to the statement.