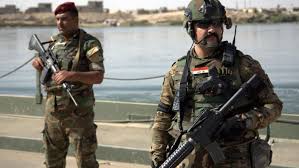 The government of Iraq announced that it was considering special forces and ground operations against the Islamic State in neighboring Iraq, a battleground alreadyfeaturing at least ten major military actors fighting each other.

Reuters quotes Iraqi government adviser Hisham al-Hashimi as confirming that the plan exists, but does not yet involve ground troops. The remarks follow a press conference Sunday in which Prime Minister Haider al-Abadi expressed a desire to expand Iraq’s operations “from fighting terrorism in Iraq to fighting terrorism in the region.” He described Syrian Islamic State pockets as “a real danger” for Iraq.

Abadi emphasized, however, that Iraqi forces would not be “trespassing over our border or attacking neighboring countries.”

In the event that the Iraqi armed forces would be interested in executing plans to attack the Islamic State in Syria, the Syrian Defense Forces (SDF), a U.S.-backed coalition largely made up of members of the Syrian Kurdish People’s Protection Units (YPG/YPJ), have expressed interest in cooperating with Baghdad. The YPG is one of the most successful militias in fighting ISIS and participated in defeating the terrorist organization in its “capital,” Raqqa.

“Iraq is a neighboring state and is also suffering from Daesh [IS] terrorism. Daesh [ISIS] is present in the shared area between us, and this points to the possibility of conditions arising that would pave the way for joint actions against Daesh,” Aldar Xelil, a co-chair of the Movement for a Democratic Society (TEV-DEM) governing Syrian Kurdistan, said this week. The YPG is the military arm of the Syrian Kurds attempting to establish a state in northern Syria, known as Rojava to the Kurds.

Iraq has very recently began to soften its stance on the Iraqi Kurdistan Regional Government (KRG) a separate entity from the Syrian Kurds sometimes at odds with their political leaders. After forcing the Iraqi Kurdish Peshmerga out of areas near Kirkuk, the Islamic State began to take advantage of their absence and the relatively week Iraqi army. Baghdad announced this week that it would allow the Peshmerga to participate in the ISIS fight once again.

In Syria, Xelil also objected that the Turkish invasion of Afrin, Rojava – dubbed “Operation Olive Branch” – had distracted from eliminating the remaining factions of ISIS in the area and allowed the group to “revive.”

Turkish President Recep Tayyip Erdogan launched “Operation Olive Branch” to remove the Syrian Kurds from Rojava, which shares a border with Turkey. The Turkish government has designated the YPG a terrorist organization, indistinguishable from the Kurdistan Workers’ Party (PKK), a Marxist group also designated a terrorist organization by the United States. Washington treats the YPG as a separate entity and cooperates with it in the fight against ISIS.

On Thursday, Turkish presidential spokesman İbrahim Kalın asserted that Turkish troops would not leave Afrin. “Operation Olive Branch will continue until the whole region around Afrin, including Tal Rifaat, is cleared of terrorist elements,” he announced, referring to the Kurds.

In addition to facing pressure from the United States and the Kurds to leave Afrin, the Iranian government has attempted to negotiate with Turkey so that the land falls into the hands of its proxy, Syrian dictator Bashar al-Assad. Erdogan has also called Assad a “terrorist” and declared that the “only reason” Turkish troops would enter the country is to “end the rule of the tyrant Assad, who terrorizes with state terror.”

Turkey hosted a trilateral meeting between Erdogan, Iranian President Hassan Rouhani, and Russian President Vladimir Putin on Tuesday in which the leaders discussed strategy in Syria.