You are here: Home / MidEastGulf / Iraq launches its first drone from Kut Airbase to target ISIS sites in Anbar 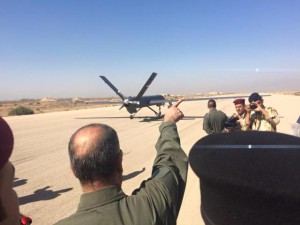 Iraqi has launched its first drone flight from al-Kut Airbase towards al-Anbar to target sites belonging to the ISIS organization in the province.

The Iraqi TV channel Alsumaria reported that, “the first Iraqi combat drone took off, this morning, from Kut Airbase in Wasit province,” pointing out that, “the plane headed towards Anbar to strike a target for ISIS,” and adding that, “the process of launching the aircraft was conducted in the presence of Defense Minister Khaled al-Obeidi,”

It is noteworthy, Iraqi forces are often assisted by US drones to provide information about ISIS targets and the situation in the provinces controlled by the organization.