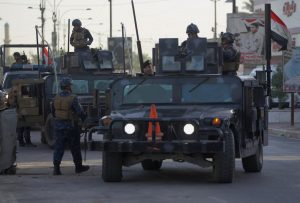 An Iraqi counter-terrorism force announced on Tuesday the launch of a military operation to track down Islamic State militants in Salahuddin province, like reported by iraqinews.com.

The operation, dubbed “Black Dust”, was launched in Kanous village, northeast of Salahuddin, Alghad Press quoted the Counter-Terrorism Service as saying in a statement.

It is backed by warplanes of the U.S.-led international coalition and Nineveh police, the statement read.