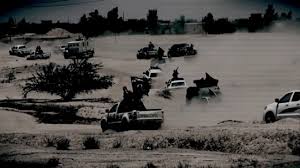 The recent killing of Islamic State’s top leader in Iraq should not be seen as a crippling sign for the terror group, which has in recent months received fresh recruits and increased its attacks in the country, says a senior Iraqi Kurdish military official according to voanews.com.

U.S. officials have confirmed that a U.S.-led coalition airstrike eliminated Jabbar Salman Ali Farhan al-Issawi, known as Abu Yasser, last week near the Iraqi province of Kirkuk. Abu Yasser reportedly had been leading the IS insurgency in Iraq since 2017.

Despite Abu Yasser’s death, Sarbast Lazgin, deputy minister of Iraqi Kurdish peshmerga forces, says the terror group has increased its activities while Baghdad and the Kurdistan Regional Government (KRG) have yet to come to an effective joint mechanism on how to govern so-called disputed areas. Kirkuk is also considered part of the disputed territories between Baghdad and the KRG.

In a phone interview with VOA, Lazgin said the jihadists are already exploiting a “security vacuum” in those areas.

“I don’t want to say it will have no impact,” he said, referring to Abu Yasser’s death. “But experience has shown groups that can indoctrinate their members to a level where they are willing to blow themselves up, the demise of one person will not change much. It may have a temporary impact, but the group will soon find a new replacement.”

While noting that IS’s current objectives are less ambitious than they were in 2014, Lazgin said the jihadi group recently has shown capabilities to mount more lethal and well-planned attacks.

“They now carry out operations that are larger in scale,” he said. “They now attack military outposts and units.”

Last month, IS claimed responsibility for a twin suicide attack that targeted a busy market in the Iraqi capital, Baghdad, killing nearly three dozen civilians and wounding many more. In January, IS also targeted a base for the Iran-backed Shi’ite militias, killing at least 16 fighters including their commander.

The Kurdish official said their intelligence indicates more fighters from Arab nationalities have recently joined IS in Iraq, crossing from the country’s nearly 650-kilometer porous border with Syria.

He estimated the current number of the group’s Iraq-based active militants to be at 1,500, but that does not include sleeper cells, which are frequently discovered.

U.S. military officials say the extremist group, also known as Daesh, “remains a serious challenge, but relentless pressure by our security partners in Iraq and Syria is preventing a reemergence of Daesh.”

“Daesh leadership, finances and recruiting are crippled in Iraq,” said Col. Wayne Marotto, spokesman for the global coalition against IS. He did, however say, “Daesh continues to pursue an insurgency with hit-and-run tactics, assassinating, and intimidating local leaders and security forces and extending its influence in rural areas.”

“Daesh is no longer able to sustainably occupy any territory in Iraq and Syria,” he added.

Colin Clarke, director of policy and research at the New York-based Soufan Center, believes IS has the “means to launch a comeback” as it continues to find ways to fund its insurgency.

“While the group isn’t bringing in anywhere near what it did at its peak, it’s also spending far less because it doesn’t have a proto-state to administer,” he told VOA.

Still, IS “has an estimated $100 million in reserves, and continues to use Turkey as a logistical hub,” Clarke said, adding that the group generates revenue from oil smuggling and kidnapping for ransom.

Kurdish officials say IS has found a foothold in several areas in northern Iraq that are disputed between the KRG and the central government.

In recent months, KRG and Iraqi military officials have held bilateral meetings on how to jointly provide security for the disputed territories.

Peshmerga official Lazgin said those meetings had led to “significant progress” on establishing joint planning and operations centers, but he added that in December, his ministry received a letter from Iraq’s ministry of defense, calling for an end to such plans.

“The letter basically told us: let’s rather have only a communication line open and you can be in your own area and we can be in our own area, and that there is no need for the joint operations centers,” he said.

Iraqi military spokesman Yehia Rasool did not respond to VOA’s request for comment about this matter.

This week, the KRG appeared to have taken matters into its own hands after it mobilized troops near Makhmour, a disputed town about 65 kilometers from Irbil, the regional capital.

Some local Iraqi officials have voiced concern over the deployment.

“The regional authorities are trying to extend [their control] to the administrative borders of Kirkuk province and send peshmerga forces to the Debs district areas, where the oil wells of the North Oil Company are located,” ethnic Arab and Turkoman members of the Kirkuk Provincial Council said in a statement Tuesday.

“We categorically reject the return of Peshmerga forces to the administrative boundaries of Kirkuk province,” their statement added.

In response, the KRG said, “There has been no unusual movement against Iraqi forces, and what has happened is because the Daesh terrorist threats have recently increased in Mount Qarachogh and the Makhmour area, and the intelligence confirms that Daesh wants to commit terror acts in these areas.”

In October 2020, Baghdad and KRG reached a deal to “normalize” the situation in Sinjar, a Yazidi town that fell to IS in 2014 and became the scene for a genocide against the religious minority.

The agreement established that security of the disputed town will be handed over from a militia affiliated with the Kurdistan Workers’ Party (PKK) to Iraqi forces. The Turkey-based PKK is designated as a terrorist organization by Washington and Ankara.

The deal was commended by the United Nations, the U.S. and Turkey, hoping that it would help the internally displaced Yazidi families return to their homes in Sinjar.

After initial objections, the PKK appeared to have agreed to the new deal. Local news networks recently showed Iraqi flags replacing the PKK ones raised on buildings in the town, but Kurdish official Lazgin says much of that deal still remains on paper.

“The PKK forces are still in the area and in fact their activities have increased,” he said. “It’s true they lowered their flag in some buildings inside the city of Sinjar, but outside the city and particularly in Mount Sinjar, a 70-kilometer-long range, I can say that 80% of the mountain is under the PKK’s control,” he added.

Lazgin said he doubted that Iraq will be able to fully defeat terrorism unless its main ethnic and religious components find a mutually agreeable political system.

“If Iraq remains indefinitely the way it is, we expect the impact of this group called Daesh to only increase in Iraq. Unfortunately, the root causes that led to the birth of Daesh are still here and that explains why bloodshed and terror will always plague Iraq,” he added.