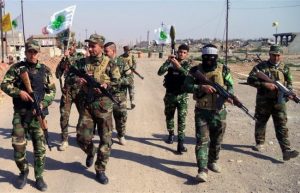 Number of paramilitary personnel killed by Islamic State members in southwest of Kirkuk have reached 21 victims, sources were quoted saying on Monday, like reported by iraqinews.com.

Troops of the Federal Police and al-Hashd al-Shaabi (Popular Mobilization Forces) raided, early today, al-Saadouniya village after combing the region, the sources told DPA. The forces then withdrew after finding more victims, reaching 21. Most of them were beheaded. Seven military vehicles were burnt.

Iraqi troops, according to the sources, are still looking for the militants in order to reach the abducted personnel in Hawija.

Speaking to Baghdad Today website, a security source said IS members disguised as Federal Police personnel in a fake checkpoint.

On Sunday evening, news reports said security troops lost communication with 24 paramilitary personnel in addition to losing track of eight vehicles in Hawija. Other reports indicated confrontations between PMFs and Islamic State members in southwest of the province.

Last week, Kirkuk Governor Rakan al-Jabouri warned that Islamic State still poses a serious threat to the security of the province, saying that the militants are still active in Kirkuk’s remote areas and farms around villages.

As many as 3,298 civilians were killed and 4,781 others were wounded in 2017, excluding Anbar civilian casualty figures for November and December, which are not available, the United Nations Assistance Mission for Iraq (UNAMI) said in a report in December.