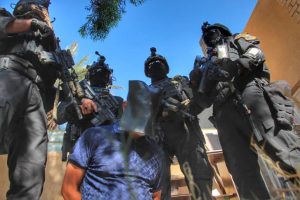 The Counter-Terrorism Service arrested one of ISIS leaders, known as “Abu Nabaa”, at Baghdad International Airport. The spokesman for the Commander-in-Chief of the Armed Forces announced, on Monday, like reported by shafaq.com.

“The intelligence service carried out an operation and arrested an ISIS leader who was trying to reach the country for holding meetings with terrorist gangs on the outskirts of the capital Baghdad.” Yahya Rasool said in a statement.

The so-called Abu Nabaa has been involved in terrorist activities since 2003, he belonged to al-Qaeda and ISIS, and was a responsible of terrorist gangs in Iraq within the district of Baghdad governorate, according to the statement.

In the context of combating terrorism, Tuz Khurmatu Kaimakam, east of Saladin, Hasan Zain al-Abidin, stated on Monday that the intelligence and security services are prepared for any possible attacks by ISIS as a reaction of Al-Mashak incident north of Baiji district, which killed and wounded 18 security and civilian personnel.

Iraq has declared victory over ISIS in 2017, after a year that saw the country army, a range of foreign allies and various local forces drive the fighters out of all the towns and villages that once made up their self-proclaimed caliphate.

The United States has led an international coalition conducting air strikes against ISIS since 2014 when the group swept across a third of Iraq.

U.S. troops have served as advisers on the ground with Iraqi government forces.