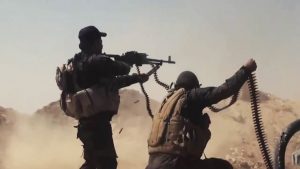 The Islamic State (IS) militants attacked a unit of Hashd al-Shaabi militia in Kirkuk province in the early hours of Wednesday, killing three men from the Shi’ite fighters.

According to the information obtained by BasNews, armed conflicts between the two group erupted in Hamzaqa village near Hawija (some 55 kilometres southwest Kirkuk province) at around 01:00 a.m. Baghdad time.

At least two other Hashd al-Shaabi militiamen were wounded in the confrontation.