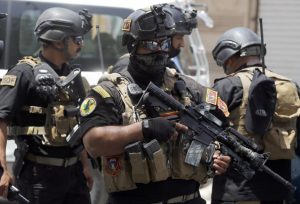 It described the five as “some of the most wanted” leaders of ISIS. They were named as Saddam al-Jammel, Mohamed al-Qadeer, Ismail al-Eithawi, Omar al-Karbouli and Essam al-Zawbai and were shown in yellow prisoner uniforms.

The New York Times reported that the group were captured as part of a sting operation carried out in coordination with U.S. intelligence. NBC News was note immediately able to verify that report.

Iraqi Prime Minister Haider al-Abadi said last month he would “take all necessary measures” against militants based in Syria. The Iraqi air force has carried out several airstrikes since last year against ISIS positions in Syrian territory.

Abadi declared final victory last December over the group, which overran a third of Iraq in 2014. But the militants still pose a threat along the border with Syria and have continued to carry out ambushes, killings and bombings across Iraq.

There are some 5,000 U.S. troops in Iraq training the country’s military.