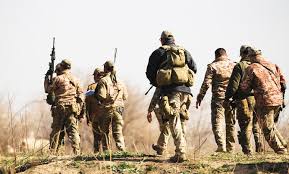 A security source confirmed to several local media outlets that in a sudden attack, late at night, the Islamic State targeted the border guards’ headquarters in the Makr al-Naam region, near the Iraq-Saudi Arabia borderline, killing two policemen and wounding another three soldiers.

In the past few weeks, the Islamic State has escalated its insurgent attacks, especially outside cities, using guerrilla warfare methods following its defeat in 2017. Senior Iraqi officials say the Islamic State continues to be a threat in many areas that were under its control during its takeover of large territories in the country six years ago.

Iraqi Security Forces recently launched a new military sweep and capture operation in the “Wadi Houran” area in the border town of Al-Qaim, as part of military campaigns included in the vast areas to take down Islamic State members. The Iraqi army has stated several times that the sprawling and rugged area is a stronghold of the terrorist group’s remnants.

Elsewhere, eyewitnesses and a security source confirmed to Kurdistan 24 that a Katyusha rocket targeted a security company headquarters in Al-Qadisiyah neighborhood, next to Al-Karkh in Baghdad.

At the same time, the Iraqi army, in a statement, said an explosive device (bomb) detonated on the international highway in Babil province, after a convoy of a civilian transport company contracted with the International Coalition passed, causing damage to a civilian vehicle.

“The civilian convoy was carrying supplies for the US-led coalition forces in southern Iraq, and as a result of the blast, a civilian was wounded,” security sources confirmed.

This is the most recent targeting of civilian convoys in contract with the international coalition in Iraq, as a series of similar attacks in Dhi Qar, Diwaniyah, and other southern cities occurred in the past weeks.

The attacks that targeted the convoys in the past did not result in loss of life but did cause material damage, in a series of similar incidents in recent weeks.

No group has claimed responsibility for the attacks.