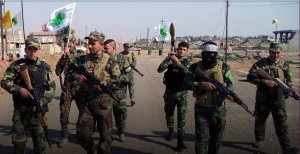 Iranian-backed Shi’ite militias of Hashd al-Shaabi came under another attack by the Islamic State (IS) overnight on Sunday in Diyala province, like reported by basnews.com.

The attack was carried out on Hashd al-Shaabi’s 110 Brigade which consists of Kurdish Fayli locals of Khanaqin and its surrounding areas.

BasNews has learned that the attack led to fire exchange for over an hour with several injured on both sides.

The clash reportedly took place in the village of Mohammed Haider, near Saadiya subdistrict of Khanaqin.

Saadiya is a Kurdish disputed territory currently under the control of Hashd al-Shaabi.