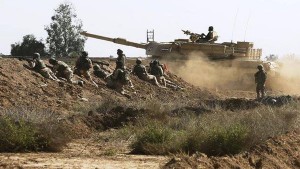 A source in the joint operations announced on Wednesday, that the suicide bombers official in ISIS was killed in the city of Fallujah, along with 12 other members of ISIS, including prominent foreigners and Arabs leaders in an aerial bombardment conducted by the international coalition aviation south of Tikrit (170 km north of Baghdad).

The source stated in an interview obtained by IraqiNews.com, “The international coalition aviation, based on accurate information conducted an air strike on a gathering of ISIS members west of Muskashafah area south of Tikrit, killing a number of ISIS leaders, including Jaafar Hussein, Abu Sabah al-Khadawi and Abu Hammam.”

The source, who added, “The death toll included ISIS suicide bombers official in the city of Fallujah, in addition to a Chechen leader and eight other terrorists.”