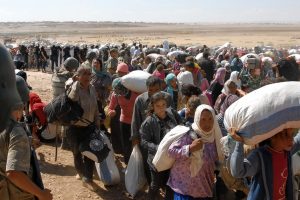 Hundreds of Kurdish villagers have been forced to flee their homes in the semi-autonomous Kurdistan region of Iraq due to Turkish bombing — and are being replaced by jihadists imported from Syria, the Star was told today.

An agricultural worker from Barwari Bala in the mountainous Duhok province, which borders Turkey, told the Morning Star that he had abandoned his land and home due to the intensity of the aerial bombardment.

“Every day, every night, for the past weeks we are being bombed. Our lands are being destroyed: we cannot grow our crops,” he said.

“Nearly all of us have left — there is nothing for us. Our future is being destroyed, and they give our homes to Daesh [Isis].”

“We are civilians: farmers, children. Why are they doing this? The world does nothing to help because we are Kurds. Everyone wants to kill us.”

He insisted that there had been no guerilla fighters in the villages — Turkey’s pretext for invasion — but added that the people supported the banned Kurdistan Workers Party (PKK), which Turkey deems a terrorist group, as the only force preventing a genocide.

Turkey’s illegal invasion of Iraqi Kurdistan, codenamed Operation Claw Lightning, started on April 23, the anniversary of the start of the Ottoman Armenian genocide in 1915, during which 1.5 million men, women and children were systematically exterminated.

As previously reported in the Morning Star, more than 2,000 jihadists have been enlisted to support the Turkish military operation as it struggles to cope with the fierce resistance of the guerilla fighters.

And in the recent clashes, PKK fighters have reported that during close combat they have heard their adversaries speaking in Arabic.

“These Islamists are wearing Turkish army uniforms,” a source said. “This is something we have seen in Idlib too,” referring to the province in northern Syria where the extremists have their last stronghold.

KCK spokesman Zagros Hiwa said that the first steps are being taken to settle the Islamist mercenaries and their families in the village of Keste in the Metina area of Iraqi Kurdistan, where some of the heaviest fighting has taken place.

“The Turkish plan is to forcefully remove the Kurdish inhabitants of the village — this includes several Yezidi families who fled from Sinjar in 2014 during the attacks of the Islamic State.

“This plan is part of the general policy of Erdogan’s regime against the Kurds: ethnic cleansing and genocide,” he said.

Mr Hiwa urged people to “take a stance against Turkey’s attacks” to prevent a similar situation to that in Afrin in Syria, where 300,000 people have been internally displaced.

But the Kurdistan Democratic Party, the senior partner in the regional government, has come under criticism for its muted response, amid accusations of collusion with Ankara.