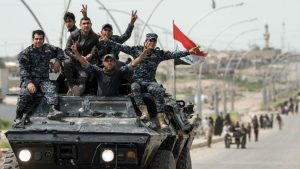 Iraqi forces retook full control of one the largest neighbourhoods of west Mosul from the Islamic State group on Tuesday, after a week of intense fighting, a top commander said according to alaraby.co.uk.

“It used to be one of the main strongholds for terrorist groups,” he said.

Saadi said the fighting in Tenek was fierce and lasted a full week.

“More than 20 car bombs were destroyed, dozens of terrorist militants were killed. Their bodies are still on the streets and inside houses,” he said.

The elite forces have been spearheading a massive offensive launched in mid-October 2016 to retake Mosul, the country’s second city and the last major Iraqi bastion of the militants’ now crumbling “caliphate”.

Last week, Iraqi forces recaptured two other neighbourhoods, al-Thawra and Nasr, in the west of the city.

The government forces also killed a senior IS operative who had been in charge of chemical weapons for the group in Mosul with a guided missile strike in the Zanjili neighbourhood, according to the head of Iraq’s federal police, Raed Shakir.

The eastern side of the city, which is divided by the Tigris River, was recaptured in January, and a push on the west bank of Mosul launched the following month has made steady progress despite fierce resistance.

The loss of Mosul would be a death blow to the “caliphate” IS proclaimed after capturing the city in a massive offensive in June 2014. The group now only control seven percent of Iraq, down from the 40 percent of the national territory over which they ruled three years ago, Iraq’s military says.

Only a few hundred IS fighters are believed to remain in west Mosul, most of them hunkering down in the Old City amidst several hundred thousand trapped civilians.

The only two other significant towns IS still holds are Hawija and Tal Afar. The militants also control territory in remote areas of western Iraq, near the Syrian border.

Iraqi forces have retaken neighbourhoods to the south, west and north of the Old City, tightening the noose around IS before a high-risk final assault.

The narrow streets of the Old City and its population density will force the Iraqi forces to conduct perilous dismounted operations which observers fear could yet allow holdout militants to stage an extended last stand.