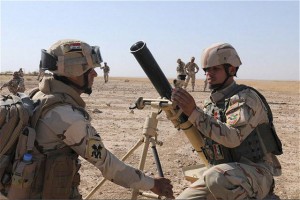 Iraqi military source said on Monday that fierce fighting toward the south side of Baiji is taking place, specifically in Albu Tohma village.

The source told Shafaq News that Iraqi forces attacked ISIS in the vicinity of Albu Tohma village as clashes still ongoing in the meantime.

He noted that the fighting in the vicinity of Baiji refinery is taking place now, but the presence of roadside bombs hinder the progress of the forces there.