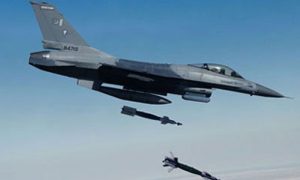 A senior Islamic State security commander was killed on Monday when warplanes pounded group locations in western Anbar, a security source was quoted saying like reported by iraqinews.com.

Fighter jets from the United States-led coalition killed Hussein Ahmed al-Abdullah, aka Abu Hamza al-Ansari, a Syrian, an an air raid on the town of Qaim, west of Anbar and near the borders with Syria.

According to the source, quoted speaking in a statement reported by SNG website, al-Ansari was an outstanding security commander within IS, and had been involved in the execution and detention of civilians and security members in Waim, Rutba and the Syrian Boukamal city.

Islamic State has lost tens of thousands of local and foreign members in Iraqi, U.S.-backed campaigns since 2016.

Islamic State militants have held the towns of Annah, Rawa and Qaim, on Anbar’s western borders with Syria, since 2014, holding thousands of civilians there. Security reinforcements have reportedly been sent recently near those towns preparing for an attack against the group.

While the Iraqi government said late August that its next target of anti-IS military action was Kirkuk’s Hawija, some officials were quoted saying that parallel operations in western Anbar could also be carried out.