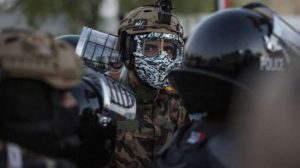 The Iraqi counter-terrorism service has captured four terrorists belonging to the Islamic State terrorist organization in the areas of Taji and Al-Fallujah near the capital of Baghdad, a spokesperson for the Iraqi’s army commander-in-chief, said on Thursday.

“Under an order of the Commander-in-Chief of the Armed Forces, Mustafa Al-Kadhimi, the counter-terrorism service continues targeting cells of the IS terrorist gangs, so it has been able to capture four terrorists in the areas of Taji and Al-Fallujah, with the arrests made possible by accurate intelligence data received,” Yehia Rasool tweeted.

In late 2017, Iraq declared a victory over the Islamic State, but the army, with the support of the US-led coalition and militia units, still conducts offensives against terrorists and sleeper cells that are active in different parts of the country.

Earlier in February, the country’s Federal intelligence and investigation agency said that its units had detained 24 people affiliated with the IS in the western province of Anbar.