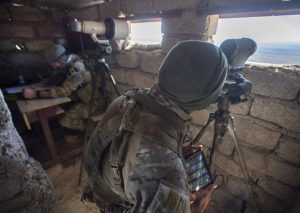 Canadian special forces have played a central role in hunting down, detecting and dismantling stockpiles of chemical weapons used by Islamic State militants in Iraq, according to sources with knowledge of the top-secret operations, like reported by theglobeandmail.com.

Some of these highly trained soldiers have advanced scientific degrees and used their specialized skills to decontaminate Kurdish Peshmerga fighters and Iraqi soldiers affected by mustard gas.

Canada’s special forces are made up of the elite JTF-2 counterterrorism force, regular commandos, a special helicopter detachment and the Canadian Joint Incident Response Unit (CJIRU), which is responsible for responding to nuclear, chemical and biological attacks.

Soldiers with the CJIRU are among about 200 Canadian special forces deployed in northern Iraq focused mainly on training Kurdish fighters. Some of them recently helped in the battle to reclaim the Iraqi city of Mosul from the Islamic State, including a small number of CJIRU soldiers whose job was to search for and destroy chemical weapons.

Mosul was at the centre of the Islamic State’s chemical-weapons production, mostly small batches of low-quality chlorine and sulphur mustard agents, but the hardline Sunni militants also had control over radioactive material at the city’s university.

Sources, with knowledge of the activities of Canada’s special forces in Iraq, but who were not authorized to speak on the record, have told The Globe and Mail that CJIRU soldiers detected and dismantled weaponized chemical components and hazardous material in Mosul between March and August of this year.

“They have got both tactical training, so they can operate alongside special forces, but they also have technical training in their ability to handle biological, chemical or radioactive agents.”

For security reasons, the sources would not discuss the exact nature of the operations that were conducted in eastern and western Mosul.

Major Alexandre Cadieux, who speaks for Canadian Special Operations Task Force (SOTF) in Iraq, said the military has a policy of not commenting on its special-forces activities and the role of CJIRU soldiers.

The Washington Post reported in July that two caches of the highly dangerous cobalt-60 isotope used in radiotherapy-treatment machines in medical facilities was discovered on a university campus in Mosul. It is not known whether the Islamic State knew that the cobalt-60 could be used to make a dirty bomb, or whether they did, but were afraid of being exposed to the lethally high levels of radiation.

The Canadian military would not say whether CJIRU soldiers were part of the U.S. operation to retrieve the cobalt-60 radiation machines. Asked if Canada played a role in finding the radiation machines, Major Cadieux said the armed forces “will not provide information that could jeopardize, even indirectly, operations by Iraqi security forces and the [U.S.-led] coalition.”

U.S. officials have confirmed that the Islamic State had gained control of small quantities of natural or low-enriched uranium from the days of Saddam Hussein’s rule, as well as some relatively harmless radioactive iridium used in industrial equipment.

The Canadians, often working alongside their secretive U.S. counterparts, have highly specialized sensor equipment that allows them to sample, identify and characterize chemical and hazardous material. They are assisted in their operations by U.S. airborne sniffers that can detect radioactive and chemical agents.

“They have got the ability, in very small numbers, to do the decontamination and containment of the site,” Mr. Day said. “Some of the [chemical weapons] are lethal within metres, some of them are lethal within hundreds of metres and that is what these men and women are doing.”

Mosul, Iraq’s second-biggest city, was captured by Islamic State fighters in 2014 but government forces – with the help of U.S. and Canadian special forces – retook the city in late July in an operation that lasted six months.

Iraqi police have accused the Islamic State of using chemical weapons against their forces in Mosul. Most of these involved either the use of chlorine or sulphur mustard agents, delivered with mortars, rockets and improvised explosive devices.

The Islamic State has used chemical weapons in Iraq and Syria at least 52 times according to the IHS Conflict Monitor, a London-based research and intelligence-gathering group. A report by IHS said at least 19 of 52 attacks took place in and around Mosul.

Canada’s Armed Forces established the CJIRU team in 2006. Its principal focus – working alongside the RCMP and Health Canada – is protecting Canada from a nuclear, radioactive, chemical or biological attack.

Mr. Day said only a small number of CJIRU member are sent overseas on military missions, such as Iraq.

“Their number one priority is the domestic response. That domestic capability is fenced off and thou shall not touch that capability except in times of emergency,” Mr. Day said.