You are here: Home / MidEastGulf / Iraq calls to support a UN resolution to send international forces to protect its effects 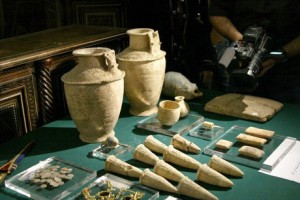 The Minister of Culture and Tourism and Antiquities , Faryad Roandzi called Holland to the need to support an Iraqi – Italian project decision that will be submitted to the United Nations by sending

an international force to protect the effects of which were looted, theft and destructed by ISIS terrorists since its control over the northern and western regions of the country in mid of last year.

This came during a meeting at the ministry’s headquarters, and the Dutch Ambassador ,Jan Temans in Baghdad, according to a statement issued by the ministry

The statement said that the Minister of Culture stressed during the meeting the need to support Iraq cultural and civilization issues in the international community , organizations and international conferences, and work hard to save its legacy and cultural heritage in history, noting the legacy of Iraq is a humanitarian and World Heritage not a local matter.

Roandzi stressed on the importance of supporting Iraq and help in returning its stolen and looted historic property, through coordination between Iraq , countries and relevant organizations.

The Minister of Culture called to support the joint Iraqi – Italian decision project which will be submitted in the United Nations, which includes that the United Nations issue a practical decision and apply it to protect Iraq’s archaeological sites, by sending troops to protect its effects, as it happens in conflicts, it is scheduled to attend the meeting by leaders of all countries of the world not on the level of ministers of culture only.

The statement concluded that the two sides discussed the Iraqi and Dutch possibility of Iraq’s participation in an annual exhibition held in the Netherlands, as the Netherlands wants the participation of Iraq in the exhibition backed by of the world museums . a number of protocols to train Iraqi cadres will be signed in addition to the support of the Iraqi National Museum