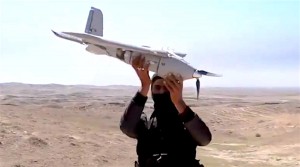 The Iraqi Security Forces on Sunday called on the US-led coalition to provide them with anti-drone weapons to protect their troops from Islamic State’s (ISIS) bomb-dropping drones in the Mosul operation, like reported by aranews.net .

In the meantime, the US-led coalition said in a statement that they have sent a DroneDefender and additional advanced anti-drone systems in support of the Iraqi forces fighting ISIS in Mosul, in Iraq’s northwestern Nineveh Governorate.

ISIS is using small drones with small munitions, similar to grenades, in Mosul that indiscriminately kill and injure civilians and Iraqi soldiers on the ground.

The Islamic State has recently released a video showing its fighters using attack drones to carry and drop bombs on Iraqi troops fighting in Mosul.

“The ISIS drones have evolved over time,” the US commander Colonel Brett Sylvia previously said in a press conference. “It is a capability that they have had for pretty much the duration of the time that we’ve been here.”

“As we’ve made our way into Mosul now, what we’ve seen is that they [ISIS] use the smaller drones, the quad copters things, with a much shorter ability to project them out,” he added.