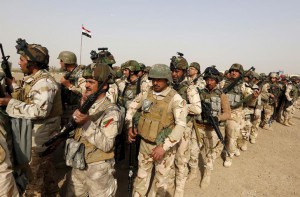 Iraq’s military has started a mission to liberate Mosul from the Islamic State (ISIS/ISIL). The terrorist group has held Iraq’s second-largest city since June 2014.

On Thursday, the military announced “it had captured several villages” outside of Mosul with the help of American airstrikes.

“The first phase of the Fatah (Conquest) Operation has been launched at dawn to liberate Nineveh, raising the Iraqi flag in several villages,” stated the Iraqi military.

They launched the assault from Makhmour, located 37 miles south from Mosul. Reuters reported that “thousands of Iraqi troops” have arrived in the town in the last few weeks, where they joined the Kurdish peshmerga and United States forces.

On March 20, the Islamic State’s media reported that a U.S.-led airstrike killed 25 people in Mosul. Other sources told CNN the strikes hit Mosul University, which the terrorist group uses as a base. Former governor Athil Al Nujayfi told the network the airstrike killed “17 senior ISIS fighters and numerous local leaders.”

“The goal [of the operation] is to secure this area and make it a safe point from where troops coming from the capital, Baghdad, will be able to launch incursions and encircle Mosul, along with the northern areas controlled by Kurdish peshmerga forces,” an Iraqi security source told the BBC.

The Iraqi officials did not specify the exact date they plan to start the “assault on Mosul itself.”

“Recapturing the city would represent a huge victory for the Iraqi forces, which have been making slow gains against the extremist group’s fighters. It took months last year to retake the much smaller city of Ramadi from the militants,” wrote USA Today.

Lieutenant General Sean MacFarland, who commands the U.S.-led coalition, told media that the Iraqi officials do not believe they will “recapture Mosul until the end of 2016 or early 2017 at the earliest.”

The Islamic State captured Mosul in June 2014. The city once housed a large Christian community, but the jihadists told the Christians to leave, convert to Islam, or pay a protection tax (jizya).

“They gave us an ultimatum, which is only a few hours,” said one man. “How can anyone give a 10-hour ultimatum? What can we do in 10 hours? The time limited started on Friday noon. Exactly by noon on Saturday, any Christian that remains would be executed.”

The takeover started with kidnappings of security guards and soldiers. Then the group destroyed statues of Jesus and the Virgin Mary and raised a black ISIS flag in Mary’s place. Bashar Nasih Behnam left with his two children.

“There is not a single Christian family left in Mosul,” he said. “The last one was a disabled Christian woman. She stayed because she could not get out. They came to her and said you have to get out and if you don’t we will cut off your head with a sword. That was the last family.”