You are here: Home / MidEastGulf / Iraq asks for immediate military support from US to save Anbar 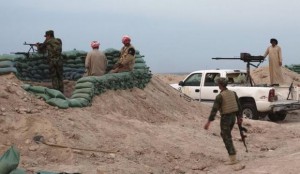 The Iraqi government and army officials have sent a plea to United States officials in Baghdad, asking for military support as soon as possible to prevent Ramadi, the largest city in Anbar Province, from falling to Islamic State (IS).

At a meeting held in Baghdad on Sunday to discuss the latest advances of IS in Anbar, Prime Minister Haidar al-Abadi warned that the jihadists may take the western Iraqi province.

The meeting was attended by Iraqi army commanders, the Parliament Speaker, US Ambassador Stuart Jones and a number of Iraqi political leaders. They discussed a plan to repel the IS Anbar offensive.

The Iraqi government is to send extra military support to the army frontlines and Shi’ite militias in the areas.

A statement published by al-Jabouri’s office after the meeting revealed, “Immediate extra military support will be sent to the Anbar frontlines to prevent further IS advances in the province.”

The statement also called for urgent international support to save Anbar residents.