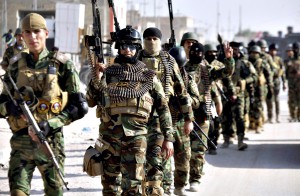 Iraqi forces closed in on the centre of Qayyarah, officials said, on the second day of an operation to recapture the town from ISIL terrorists.

Qayyarah lies on the western bank of the Tigris river, about 60 kilometers (35 miles) south of Mosul, the ISIL group’s last major urban stronghold in Iraq.

Brigadier General Najm al-Juburi from the operations command for Nineveh, the province in which both Qayyarah and Mosul are located, said the town was now encircled.

“There are only a few meters left before troops advancing from the west and troops coming from the east meet and complete the siege around Qayyarah,” he told AFP.

He said the vast majority of villages around Qayyarah had been retaken since special forces launched the operation on Tuesday.

Juburi and other military officials in the area confirmed the progress and said that a nearby oil field and refinery had also been recaptured from ISIL.

“Liberating Qayyarah will mean cutting off Mosul from the southern areas, which will make liberating Mosul much easier,” Juburi said.

“This is a blow to the organization of ISIL because it affects their economy, and this after we retook an air base that is now going to be used to attack them,” he said.

Iraqi security forces have been operating in the area for weeks, as part of shaping operations for a major offensive on the city of Mosul in the coming weeks or months.

They had already retaken the Qayyarah air field, which ISIL was not using because it has no air force but which Iraqi aircraft will soon be using against the ‘takfiris’.

Prime Minister Haider al-Abadi on Tuesday reiterated his promise that Mosul would be retaken and the country rid of ISIL by the end of 2016.