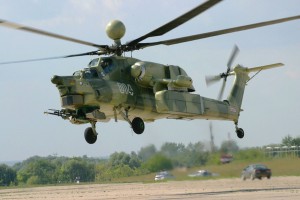 The Iraqi Ministry of Defense announced on Thursday the arrival of four advanced combat helicopters from Russia within the armament contract between the two countries.

“Four advanced combat helicopters arrived this morning to join the combat squadrons in the Army Air Force and enhance its leading role in resolving the battle against the forces of aggression, The ministry said in a statement received by Shafaq News.

The statement added that “the arrival of these aircrafts comes in implementation of contracts concluded by the Ministry of Defense with its counterpart in the Federal Republic of Russia.”

These contracts entered into force in May of 2013 and since then, Russia has supplied Iraqi with a number of anti- aircrafts and missile systems, 12 helicopter “Mi -35 M”, and 3 strike helicopters model “Mi -28”.