You are here: Home / Analysis / Iraq after the “October protests”: a different country 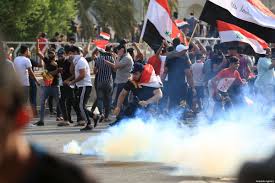 Iraq’s year-old government is of a technocratic, moderate complexion: it most likely did not foresee it would be introducing restrictive, and even repressive, measures on its watch. Six days of protests this week resulted 100 people dead and more than 6,000 wounded – the highest casualty toll since demonstrations immediately after the 2003 invasion. The government has responded by imposing a complete ban on internet use and shutting down local media outlets covering the protests. These steps are disturbingly authoritarian; they reveal Iraq’s slow progress towards a fully functioning democracy is at perennial risk of reversal, like reported by ecfr.eu.

Iraq is no stranger to protests. Indeed, this most recent round is an extension of demonstrations that have taken place since 2011 against corruption, poor services, and the political elite. The difference this time is twofold: the protests were met with a more violent response than previously; and they exposed the deep discontent among Shia provinces that have long formed the popular support base for the Iraqi state.

Perhaps the most surprising aspect of the October protests is that they came so late. This year’s unbearably hot summer and reduced services of electricity and water caused many to think protests would happen earlier. The government averted upheaval for a while by introducing measures that provided a slight improvement in services. Iraqis were also willing to give the relatively new government a chance to push forward reforms promised in the election campaign. However, 12 months after taking office, the prime minister, Adel Abdul Mahdi, looks increasingly weak and unable to deliver tangible results. He became the leader as a pragmatic compromise between Iraqi’s political power centres, the Fatah coalition close to Iran, and the Sayirun alliance – both Shiite.

There was also a more immediate spark for the protests, however: just days before they began, the government expelled General Abdel Wahab al-Saadi. For many Iraqis, al-Saadi is symbol of national identity following victory at the Battle of Mosul and the destruction of the Islamic State group (ISIS) caliphate. Iraqis also believed him to be an important figure in the fight against corruption. His removal united activists in calling for mass demonstrations.

The protests evolved organically, without a clear leadership structure. Interestingly, opposition groups that have in the past called for reform – such as the Communist Party, the Civil Democratic Alliance, independent civil figures, and the Sadrist movement – did not officially back the protest movement, unlike previous protests over the last year. Those demonstrating were largely under 25 and born in the post-Saddam era, with the older generations of Iraqis absent. Young people often view themselves as among the main victims of the political order established after 2003, pointing to corruption, poor services, and unemployment.

However, these protests are unlikely to mushroom into a major threat to the Iraqi political establishment, for two main reasons.

Firstly, the government felt able to provide a rapid, violent response precisely because the latest demonstrations lacked backing from traditional power factions. This violence revealed the strength of the established political system, which itself rests on the Fatah coalition of the governing parties and on the supporters of the Hashd al-Sha’bi forces, which are represented in parliament through Fatah. The authorities were able to use the Iraqi security forces, whose numbers and experience increased during the battles against ISIS, to halt further protest.

Secondly, the protestors lacked coordination even within individual cities. The absence of practical and realistic demands prevented them from attracting a wider following. They raised the slogan of overthrowing the regime, influenced by what they saw in the Arab Uprisings. But they were unable to provide alternative mechanisms for change, such as demanding reform of the electoral law, which favours the established parties.

In response to the unrest, the Iraqi government has proposed a package focused on youth employment, including reducing the retirement age to give young people better access to government jobs. The speed at which it will be able to introduce at least some of these measures will be critical to cooling the situation. Indeed, the protests have already pushed the Iraqi parliament to pass several anti-corruption bills that the government had previously dithered on due to their contentious nature. These include removing inspector general offices from ministries, as many Iraqis believe the offices to take part in corruption; and freezing the provincial councils that expired in 2017 following a failure to hold scheduled elections that year.

But some of proposals in the reform package could actually plunge the country into deeper economic crisis. For example, measures offering up thousands of new government posts directly contradict World Bank recommendations and entrench the rentier state mentality the Iraqi government had previously hoped to tackle through expanding private sector growth in the country. Furthermore, a new proposed temporary boost to social benefits may buy the government time, but it will do nothing for political reform and tackling corruption.

The government also needs increased support from Europe and the international community in order to stabilise the regions destroyed by fighting ISIS. It urgently needs to strengthen state institutions, fight corruption, and build a thriving private sector; and to reform the electoral law, even though this is likely to be met with fierce pushback from status quo power centres.

Despite these challenges, the current Iraqi government – having cultivated good relations with Sunni and Kurdish leaders, as well as both Iran and Saudi Arabia – is perhaps still the country’s best option for navigating Iraq away from its endemic economic, environmental, and political troubles. But if it does not undertake the urgent reforms needed to meet the demands of Iraq’s fast-growing population of 30 million people, protests and demonstrations are only likely to continue well into the future.