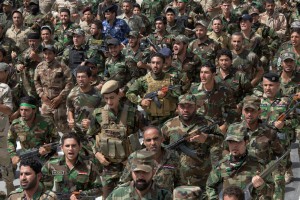 “As local forces prepare for the Mosul operation to clear out ISIS gunmen, 800 Christian volunteers have also joined the Battalion of Babylon that belongs to the Hashd al-Shaabi,” a source inside the Christian battalion told Al-Mada late Saturday.

According to the source, the Christian volunteers have been training in three military camps in the city of Baghdad and Salahadin province.

“The battalion is a special military arrangement for Christians under the control of Hashd al-Shaabi,” Al-Mada quoted the Christian source as saying.

This is not the first time non-Shiite volunteers including Sunnis and Christians have reportedly joined the Hashd al-Shaabi. The militias have previously said their military groups belong to all parts of Iraq, with different religious and ethnic backgrounds.

Moen al-Kazemi, a Hashd al-Shaabi commander, said the group is a national military group, fighting to protect Iraq and Iraqis, and that volunteers from various background are among the Shiite group.

The Shiite militias signed up 100,000 volunteers in June in Iraq’s ongoing war against the Islamic State, Kazemi said.

The Hashd al-Shaabi rose up last year at a call from Ayatollah Ali al-Sistani, the highest Shiite cleric in Iraq, when ISIS fighters overran much of country’s western territory.

On June 4, Iraqi military jets dropped leaflets over the ISIL-held city of Mosul, informing the people that Takfiri terrorists will soon be pushed out of the northern city.

“The solution, with God’s help, is close,” Lebanon’s al-Manar news website quoted the leaflets, issued in the name of the Iraqi army, as saying.

“Your armed forces are at the gate, cooperate with them,” the leaflets read, adding that a new radio station, Mosul FM, would soon be on the air.

The leaflets also urged residents to carry a portable radio with them at all times so that they could receive information on the battle for Mosul.

The Takfiri group has been committing heinous crimes against all ethnic and religious groups in Iraq, including Shias, Sunnis, Kurds, Christians, Izadi Kurds, and others.

The Iraqi army, backed by Kurdish forces and volunteer Shia and Sunni fighters, has been engaged in operations to drive the ISIL terrorists out of the areas they have been holding since June 2014.