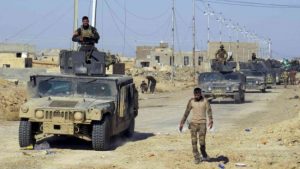 Eight Islamic State (IS) militants, including a suicide attacker, were killed in a face-off with paramilitary forces in southern Kirkuk, a military spokesman was quoted as saying.

Speaking to Alghad Press news website, Ali al-Husseini, a spokesman for al-Hashd al-Shaabi (Popular Mobilization Forces) northern axis, said “During a military operation to hunt for Islamic State militants in Kirkuk, paramilitary troops of al-Hashd al-Shaabi found a hideout that was used by the militant group at al-Aziziyah village in southern Kirkuk.”

“The troops immediately stormed the hideout and killed eight Islamic State militants, including a suicide bomber,” Husseini said, adding that one of al-Hashd al-Shaabi fighters was killed in the clashes as well.

Earlier this month, a Saudi daily paper warned of a plot by the Islamic State group to storm Kirkuk and use it as a starting point for regaining control of Mosul.

Kirkuk officials previously urged reinforcing military troops in the south and west of the province, as the region still has Islamic State members who escaped during liberation of Hawija to remote areas.

A government campaign, backed by paramilitary troops and a U.S.-led coalition, has been fighting, since October 2016, the militant group, which declared a self-styled “caliphate” from Mosul.