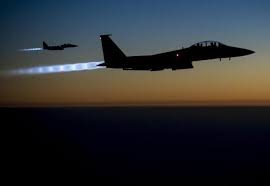 A total of eight Islamic State (IS) militants were killed when Iraqi warplanes carried out airstrikes on their hideouts in the northern province of Nineveh, the Iraqi military said on Monday.

The Iraqi warplanes conducted the airstrikes after a commando force from the Counter-Terrorism Service (CTS) spotted the hideouts at a rugged area near Hammam al-Alil, some 30 km south of Nineveh’s provincial capital Mosul, Yahia Rasoul, spokesperson of the commander-in-chief of the Iraqi forces, said in a statement.

The CTS forces seized weapons, ammunition, and explosives at the destroyed sites, the statement said without giving further details about the exact date of the airstrikes.

The mountains and vast rugged areas north of the Iraqi capital Baghdad have witnessed intense activities of the IS militants during the past months despite repeated military operations to hunt them down.

The security situation in Iraq has been improving since Iraqi security forces fully defeated the IS militants across the country late in 2017.

However, IS remnants have since melted in urban areas or hidden in the deserts and rugged areas, carrying out frequent guerilla attacks against security forces and civilians.