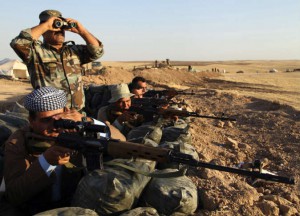 A number of Islamic State (IS) militants have been killed by Kurdish Peshmerga forces after they were trapped near Nawaran frontline in northern Iraq.

Hopefully, Tarwanshi said, the Peshmerga could spot their movements beforehand and killed them all in an ambush.

Meanwhile, the Peshmerga forces targeted an IS armoured vehicle driving from Mosul toward Khorsbad village near the Nawaran frontline, killing several more IS jihadists.

BasNews previously reported that the IS is now focusing on its frontlines against Kurdish Peshmerga forces after they were defeated in Ramadi, the capital city of Anbar province in western Iraq.

However, the Peshemrga have so far been able to defeat every IS attack and they could even inflict heavy damages on the jihadist group in northern Iraq.