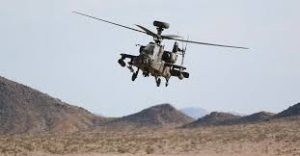 Four militants of the extremist Islamic State (IS) group were killed on Wednesday in an airstrike in Iraq’s eastern province of Diyala, a provincial police source said.

Based on intelligence reports, the Iraqi army’s helicopter gunships bombed an IS hideout near the city of Jalawla, some 135 km northeast of Baghdad, leaving four IS militants killed, Alaa al-Saadi from the provincial police told the Xinhua news.

Despite repeated military operations in Diyala, remnants of IS militants are still hiding in some rugged areas near the border with Iran, and in the vast areas extending from the western part of the province to the Hamreen mountain range in the north of the provincial capital Baquba, about 65 km northeast of Baghdad.

The security situation has been relatively improved in Iraq since the Iraqi security forces fully defeated IS militants across the country late in 2017.

However, sporadic deadly incidents still occurred in the war-ravaged country as IS remnants have since melted into urban areas or deserts and rugged areas, waging frequent guerilla attacks against security forces and civilians.