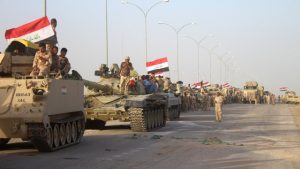 Iraqi army commanders said army forces killed 30 Islamic State members and took over a command center on the borders between Anbar and Salahuddin provinces, like reported by iraqinews.com .

A source at the Anbar army command told Alsumaria news that a force from the army’s 7th division, backed by fighter jets and paramilitary forces, killed 30 IS members during an operation at the Malha desert region.

The source said a communication facility and two booby-trapped vehicles were also destroyed in the assault.

Borders conjoining Anbar, Salahuddin and Diyala have witnessed occasional attacks by Islamic State against government and paramilitary troops deployments since Iraqi forces, backed by a U.S.-led coalition and PMus, launched a major offensive to retake areas occupied by IS since 2014, most notably the city of Mosul, Iraq’s second largest city and the group’s most important stronghold in the country.

Observers have said Islamic State’s occasional attacks against security and civilians outside Mosul aimed at distracting security attention from the Mosul front. IS still holds a few areas in Salahuddin, Diyala, Anbar and Kirkuk, but the Iraqi government, employing most of its military power in the Mosul campaign, is expected to aim at those strongholds once the battle in Mosul realizes victory.