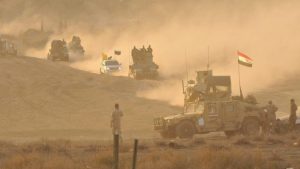 The Diyala Operations Command has announced killing three Islamic State members in operations, northeast of the province, like reported by iraqinews.com.

Earlier today, Azzawi announced carrying out two operations there to follow the militants.

A total of 79 Iraqi civilians were killed and another 99 injured in acts of terrorism, violence and armed conflict in Iraq in July 2018, according to casualty figures recorded by the United Nations Assistance Mission for Iraq (UNAMI).