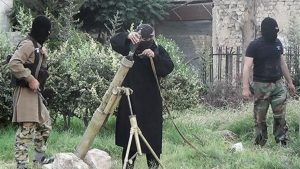 About 22 people were killed and injured in a mortar attack on Tuz Khurmatu city east of Salahuddin province, a lawmaker said on Tuesday according to iraqinews.com.

“One of the mortar shells fell on a secondary school in the city,” he said, adding that the attack caused damage to several buildings.

Jaafar expected demonstrators to take to streets later in the day to call on Iraqi Prime Minister Haider al-Abadi to protect them from the Kurdish attacks.

In November, over 23 people were killed and 60 others wounded in a deadly car bomb attack in Tuz Khurmatu, according to the BBC.

The blast ripped through a crowded fruit and vegetable market in the centre Tuz Khurmatu north of Baghdad, security sources said.

Tuz Khurmatu is claimed by both Iraq’s central government and the country’s Kurdish region. It is about 210 kilometers north of Baghdad and historically an ethnically diverse area that is home to Kurds, Sunni Arabs and Shiite Turkmens.

In the post-Saddam Hussein era, the city has witnessed outbreaks of deadly sectarian violence that have escalated following the Kurdish region’s independence vote in September.

Iraq’s Kurdish region and Baghdad are currently at a military and political standoff following the independence referendum.