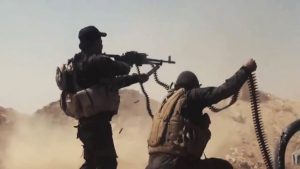 Up to 17 members of Islamic State were killed in a military operation that was launched Sunday to eliminate terrorist hotbeds in Diyala province, an army commander was quoted as saying according to iraqinews.com.

Speaking to Alghad Press on Monday, Commander of Diyala Operations Mazhar al-Azzawi said, “the military operation, which was launched yesterday in the northern and northeastern parts of Diyala, was typical and caused many casualties among Islamic State fighters.”

“The operation, backed by army jets, left 17 Islamic State fighters dead and 10 of their hideouts destroyed,” Azzawi said, adding that the Iraqi army is determined to continue purging the whole province from IS dormant cells.

In January 2015, Iraqi forces announced liberation of Diyala province from Islamic State extremist militants who proclaimed an “Islamic Caliphate” in Iraq and Syria in 2014.

The province has seen months of fighting between Iraqi troops and IS militants especially in the Jalawla and Saadiyah areas in the province’s north and areas near the town of Muqdadiyah.