Chief of Staff of the Iranian Armed Forces Major General Mohammad Hossein Baqeri called on the Army Ground Force to boost preparedness constantly and keep pace with new technologies in the military field, like reported by tasnimnews.com 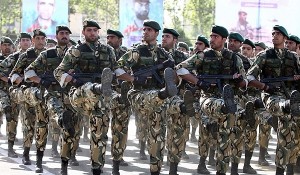 “The Army Ground Force needs to be fully prepared, increase its defensive capabilities and power and get ready for battle and defending the Islamic country’s borders by (matching itself with) new developments in the military sphere,” the senior officer said in a gathering of Army Ground Force commanders in Tehran on Monday.

He stressed that the Armed Forces should maintain such a high degree of readiness that the enemies would not dare think of attacking Iran.

“We should not neglect to boost the country’s defense power even for a moment,” Major General Baqeri added.

In September 2016, Leader of the Islamic Revolution Ayatollah Seyed Ali Khamenei called on Iran’s Armed Forces to remain in a constant state of preparedness to counter threats.

“The Iranian nation is today faced with a wide range of enemies because of its insistence on Islam, independence, sublime values… and the Armed Forces must be ready all the time to play their role if necessary,” the Leader said.