You are here: Home / MidEastGulf / Iran’s ‘suicide drones’ in Syria 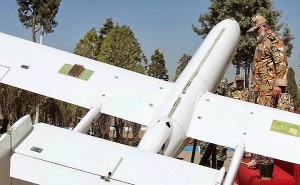 Earlier this year, the Islamic Republic News Agency had produced a story about the Iranian military’s development of “suicide drones,” in some way’s a poor man’s cruise missile, but in other ways more advantageous to their Iranian operators: the drone can operate and seek out targets of opportunity, be they targets on the ground or perhaps U.S. helicopters operating off ships in the Persian Gulf.

Now it seems the Iranian use of such technology has moved from the theoretical to the real. According to Lebanon’s NOW:

Iran has attacked rebels in northwest Syria with explosive-laden unmanned aerial vehicles (UAVs) that fly into their targets, according to rebels. A commander in the Islamist Ahrar al-Sham group told Al-Souria Net that “kamikaze drones thought to be [of] Iranian [origin] were used [on Monday to strike] Syrian opposition military bases in rural Idlib, causing extensive material damage at the targeted location.” “Five aircrafts loaded with explosives targeted an Ahrar al-Sham base in the town of Ma’ar Shimmareen [near] Idlib province’s Ma’aret Nuaman,” Hassan Abu Hamid claimed… “The destructive force of the plane was equal to the destructive force of an 82 mm mortar round, but had a higher fragmentation rate,” he explained.

That Iran is now utilizing suicide drones in Syria raises a number of other issues. Once again, it highlights the dishonesty of Iranian Foreign Minister Mohammad Javad Zarif who, in the tradition of “Baghdad Bob,” lies egregiously without regard to the evidence that contradicts everything he says. After all, it is hard to say that Iranian personnel are engaged only as trainers in Syria when they are present in the heat of battle, and now when Iranian drones are used against Syrian opposition targets.

Iran’s burgeoning UAV program — and its emphasis on utilizing drones as weapons rather than simply for surveillance — should also raise concerns given the financial windfall the Joint Comprehensive Plan of Action (JCPOA) provides the Islamic Revolutionary Guard Corps and Iranian military industries. It is quite probable that such Iran drones will soon turn up not only in Iraq and Syria when the Islamic Revolutionary Guard Corps and associated militias operate, but also in Lebanon and in Yemen.

The constant development and deployment of new Iranian drones underscores the fact that Iranian rhetoric with regard to its UAV program is not all empty, nor is Iran content simply to exist as a status quo power among its neighbors. Rather, it seeks to give its allies — most often terrorist groups and state sponsors — a qualitative military edge over their opponents at the very moment the United States is increasingly absenting itself from any meaningful presence or alliance in the region.