President-elect described accord as ‘disastrous’ during election campaign, vowed to dismantle it 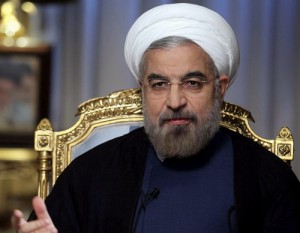 Iran’s President Hassan Rouhani said Wednesday there was “no possibility” of its nuclear deal with world powers being overturned by US president-elect Donald Trump despite his threat to rip it up.

“Iran’s understanding in the nuclear deal was that the accord was not concluded with one country or government but was approved by a resolution of the UN Security Council and there is no possibility that it can be changed by a single government,” Rouhani told his cabinet, according to state television.

Last year’s accord with world powers saw international sanctions on Iran lifted in exchange for guarantees that it would not pursue a nuclear weapons capability.

During the election campaign, Trump described the deal as “disastrous” and said it would be his “number one priority” to dismantle it.

Rouhani’s remarks came after the American ambassador to Israel called on the incoming administration to adhere to the Iranian nuclear agreement.

The nuclear pact, brokered under American leadership between six world powers and Iran last year, has been “very successful in doing exactly what it was designed to do, and that is to block systematically each pathway Iran had to achieve a nuclear weapon,” Dan Shapiro said early Wednesday. “Obviously we recommend the next administration continue [honoring the agreement], because it does fulfill that function.”

Israel was and remains the world’s leading critic of the deal, calling it a “historic mistake” and arguing that it falls woefully short of preventing Tehran from obtaining nuclear weapons.

Shapiro did not deny that Jerusalem was opposed to the pact, but added, “There is no disagreement between the US and Israeli experts about Iran’s adherence to the terms of the agreement.”

Rouhani, a moderate who has pushed for closer ties with the West, said the United States’ standing in the world had been weakened due to its “wrong policies.”

“The United States no longer has the capacity to create Iranophobia and to create a consensus against Iran,” he said. “The constructive engagement policies of Iran towards the world, and the fact that international sanctions have been lifted, have placed the Iranian economy on a road where there is no possibility of going backwards.”

Iran’s foreign minister also called on Trump to stick to international accords, following comments during the Republican’s campaign that he would tear up the nuclear deal with Tehran.

“Every US president has to understand the realities of today’s world. The most important thing is that the future US president sticks to agreements, to engagements undertaken,” Mohammad Javad Zarif said in Romania.