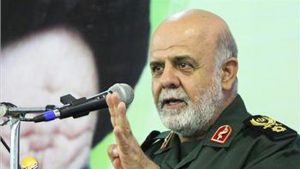 In a sign of the growing regional influence of Iran’s Revolutionary Guards, a close adviser to its foreign operations commander began his new role as ambassador to Iraq on Wednesday, state media reported according to albawaba.com.

The Revolutionary Guards’ Qods Force has military advisers in Iraq and Syria, and oversees thousands of volunteer fighters and Shiite militias fighting rebel Sunni groups including the so-called Islamic State.

Born in Iran’s Arab-majority southern province of Khuzestan, Masjedi has been a Guards member for 35 years and is “deeply familiar with Iraq’s political, security and tribal atmosphere,” said the ISNA news agency.

His appointment is likely to receive criticism from Iran’s regional rival, Saudi Arabia, which is concerned about the increasing influence of the Guards across the region.