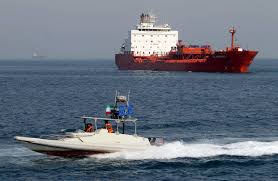 Iran’s Revolutionary Guard launched missiles targeting a mock aircraft carrier in the strategic Strait of Hormuz, a drill that was condemned by the US as “irresponsible and reckless behavior by Iran”, like reported by aawsat.com.

Footage broadcasted on Iranian state television showed the IRGC’s air and naval forces readying for an attack off the country’s southwest coast.

Speedboats skimmed across the water in formation before ground forces fired cannons and a missile was launched from a helicopter.

The mock-up of a Nimitz-class aircraft carrier came into view with rows of dummy fighter jets on either side of its landing strip, AFP reported.

Another missile fired from a helicopter left a trail of smoke before appearing to smash into the side of the fake warship.

“What was shown today in these exercises at the level of aerospace and naval forces was all offensive,” IRGC commander, Major General Hossein Salami told state television.

Tensions have escalated between Iran and the United States since US President Donald Trump unilaterally withdrew from a landmark nuclear deal in 2018.

Spokeswoman for the US Navy’s Bahrain-based 5th Fleet that patrols the Mideast, said officials were aware of an Iranian exercise she described as “attempting to intimidate and coerce,” The Associated Press reported.

“While we are always watchful of this type of irresponsible and reckless behavior by Iran in the vicinity of busy international waterways, this exercise has not disrupted coalition operations in the area nor had any impacts to the free flow of commerce in the Strait of Hormuz and surrounding waters,” Rebecca Rebarich said.