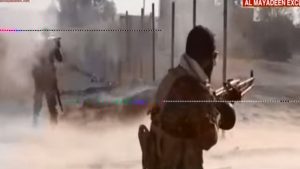 Rare footage broadcast on Al Mayadeen on Wednesday showed troops from Iran’s Revolutionary Guard Corps (IRGC) in close quarters combat with fighters from the Islamic State (ISIS) during the battles in Hamimah on the outskirts of Homs, like reported by ynetnews.com.

The IRGC’s symbol can be clearly seen on the uniforms of the fighters, who are seen charging while shooting at one of the buildings, which was apparently under ISIS control

The video also shows rockets and missiles being fired at ISIS targets.

According to reports in Lebanon, the IRGC launched a revenge campaign against the Sunni terror organization after ISIS executed IRGC commander Muhsin Hajaji last week on the Syria-Iraq border.

The execution shocked the Iranians, with Qasem Soleimani, commander of the IRGC’s elite Quds Force, promising revenge for Hajaji’s death.

“Iran’s brave sons will take revenge for this barbaric act,” said Soleimani, who promised to “uproot the filthy tree of Wahhabism and terror from the Islamic world. These crimes only increase our determination to cleanse Islamic lands of their filthy presence.”

The rare footage broadcast by the Lebanese TV network, which is affiliated with Hezbollah and the regime of Syrian President Bashar Assad, is unique as it shows IRGC soldiers fighting themselves, rather than merely advising others or instructing militiamen. This further shows Iran’s growing influence in Syria.