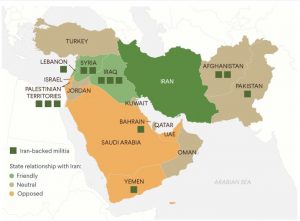 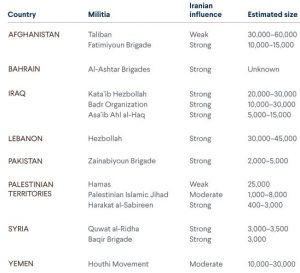 In the four decades since its Islamic Revolution, Iran has formed and supported an expanding number of allied fighting forces throughout the Middle East. Iran’s Quds Force, part of the Islamic Revolutionary Guard Corps (IRGC), serves as the main point of contact with these groups, providing them with training, weaponry, and funds to promote Iranian regional objectives, like reported by cfr.org.

Fighters from Shiite Muslim–majority countries such as Iraq and Lebanon compose Iran’s main proxies, but groups in Sunni-majority Afghanistan, the Palestinian territories, and Syria have also formed associations with Iran. At the heart of this network is Hezbollah, a Lebanese political party and militant group infamous for its acts of terrorism, which has helped Iran bridge Shiite Arab–Persian divides. Hezbollah also helped Iran support the Bashar al-Assad regime in the civil war in Syria, where it worked to bring other militias to the regime’s defense.

What are Iran’s motives?

Groups acting on Iran’s behalf have often attacked U.S. forces, and experts say Iran hopes to further leverage its growing network of partners to move equipment and personnel across the Middle East to bolster the country’s drive for regional hegemony and remove Western powers. Additionally, acting through proxies is a method of eluding responsibility for attacks.

For example, U.S.-led coalition forces throughout northern Iraq have suffered attacks by suspected Iranian proxy forces, such as Kata’ib Hezbollah and other organizations under the umbrella of Iraq’s Popular Mobilization Forces. Still, U.S. officials connect such strikes to Iran’s broad network. Following a February 2021 rocket attack that injured U.S. troops in Iraqi Kurdistan, the Joe Biden administration made its first known use of military force by ordering air strikes on facilities in Syria that are used by Iraqi militias with ties to Iran, including Kata’ib Hezbollah.