You are here: Home / Analysis / Iran’s plans in Syria

Iran is continuing with plans to create a land corridor through Iraq and Syria to the Mediterranean, as recent evidence from the Syrian border reveals, like reported by ahram.org.eg 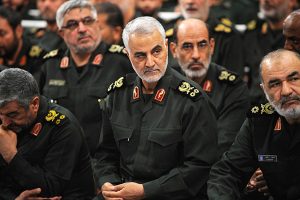 Iranian news agencies have featured photographs of Major General Qassem Suleimani, commander of the Al-Quds Force, a special division of the Iranian Revolutionary Guards, together with members of the Fatimid Brigade and the Syrian army at a location on the Iraqi-Syrian border.

They cite these photographs as evidence of the success of an Iranian-Syrian plan to link the Shia militias on both sides of the border as part of Tehran’s larger plan to create a land corridor from Tehran through Iraq and Syria to the Mediterranean.

US forces on the ground in Syria are obstructing this scheme, however. Stationed in Al-Tanf near the Iraqi and Jordanian borders, they have launched three attacks against the Iranian-affiliated contingents, the first taking place on 18 May. The Americans have also fortified an approximately 55km area around this point in the process of creating a no-go zone.

But developments in the field indicate that Iran has succeeded in circumventing the US security cordon at this fortified point, while the Syrian regime has announced that it has gained controlled of a fifth of the Badiya region of the country.

The Iranian Mizan News Agency claims that the photographs of Suleimani date to last Monday, a week prior to the news agency announcements. It added that contingents of the Iraqi Popular Mobilisation Forces (PMF), notably the Imam Ali Brigades, the Abul-Fadl Al-Abbas Forces and the Iraqi Hizbullah Brigades, had taken part in the movements and had reached the Al-Tanf border crossing on the Iraqi side from the direction of Sinjar west of Nineveh.

The Russian military command in Syria has hinted that the Baghdad-Damascus route via Al-Tanf that Tehran has been working to secure will be dropped in favour of an alternative route passing to the south of Palmyra and about 20km away from the previous one. This means that the Russians are closely monitoring the developments, but they have given no indication as to whether or not they condone the Iranian scheme.

Russian statements have varied on this question because of its bearing on Russian-US relations in Syria, rendering it difficult to say whether Moscow is with or against the Iranian plans. Russia transmitted US warnings cautioning Iran against allowing its troops to approach the Al-Tanf crossing, which Iran failed to heed in persisting in its tactics of circumventing the Al-Tanf cordon.

Then came the Russian military statement that the corridor project would continue but not via Al-Tanf, which was like saying that the problem lay with the US military concentration and not with the Iranian project per se.

However, this may not be the final Russian position, especially in view of secret US-Russian negotiations on “de-escalation zones” in Syria, talks that were set in motion because of recent US engagements against militias allied with the Syrian regime. While this may suggest possible shifts in stances, the US is unlikely to make concessions on the ground as it knows that this would be detrimental to its local and regional allies.

At the same time, if there are Russian shifts, these may not be reflected in Iranian positions. Tehran perceives the envisioned corridor as its own project and as a form of reward for its role in Syria.

Some analysts have suggested that the US, which has vowed to block Iranian access to the Levant, especially in an area that will bring it close to Israeli borders generating the conditions for a potential war, may turn a temporary blind eye to the Iranian project in Syria in exchange for a scenario resulting in the partition of the country.

Rami Abdel-Rahman, director of the London-based Syrian Observatory for Human Rights, maintains that the blueprint for such a scenario is being drawn up on the ground.

As for the US drive to deter Syrian President Bashar Al-Assad, this remains too weak to realise its aims. The first strike against Al-Tanf coincided with proposals in the US Caesar Syria Civilian Protection Act to hold Al-Assad accountable for crimes against humanity allegedly committed at the Sednaya Prison in Syria.

But even with sanctions against Al-Assad in place, time might not favour any of the parties in the light of the situation being imposed by Iran along the Iraqi-Syrian border.

In the final analysis, the US realises that Iran is working to expand its sphere of activity and presence on the ground in Syria in accordance with its own agenda. Iran, for its part, remains determined to succeed, even if this requires manoeuvring around Russia, which is the chief regulator of developments on the ground in Syria.

However, with recent signs of US-Russian rapprochement in the framework of coordination in Syria, Tehran has begun to fear that this coordination will jeopardise its project, which it now sees within its grasp in the light of the approaching end of Islamic State (IS) group control of Mosul and elsewhere in Iraq. This will free up more PMF forces in Iraq and Syria to serve as the bridge Tehran needs to complete the project.

It is not clear whether Iran has fully grasped the US messages delivered by the three attacks against Iranian-affiliated forces near Al-Tanf, but judging from its previous actions it will test out new tactics as it tries to develop its plans.

Its persistence will depend to a large extent on the ability of the US to sustain and bolster its deterrent tactics and to demonstrate the credibility of its ultimatums. As a result, in spite of all the gains that Iran and its allies have won in Syria towards the realisation of Tehran’s regional projects, the last chapter in this multi-party epic is still not clear.

Iranian ambitions could well still be dealt reversals, regardless of its success so far on the ground.