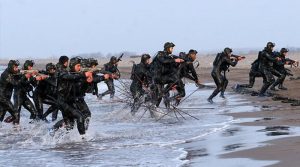 The Iranian opposition group that exposed Iran’s secret nuclear-enrichment facilities in 2002 has released new information on the leadership structure of the Quds Force naval command and the facilities it uses to train and arm Iran’s terror proxies in the Middle East, like reported by eurasiareview.com.

The Quds Force is the arm of Iran’s Islamic Revolutionary Guard Corps responsible for extra-territorial operations.

At a press briefing in a hotel in Washington, D.C. on Wednesday, the National Council of Resistance of Iran shed light on the importance Tehran places in the Quds Force as an overseas special-operations tool — and the extent to which it is willing to support its terror proxies in Yemen, the Gulf and Iraq.

In light of the new information on recruitment, training and weapon provisions for the Quds Force’s naval militia unit, experts say it is imperative that the talks in Vienna, Austria, over Iran’s nuclear program do not sidestep the issue of the Islamic Republic’s expanding web of proxy forces.

Iran is deeply implicated in Yemen’s seven-year war, where it backs the Shiite Houthi militia in its fight against the internationally recognized government.

In the past fortnight, missile and drone strikes have been launched by the Houthis targeting the UAE, including an attack on Monday during a visit by Israel’s President Isaac Herzog, in an escalation of the conflict with the Coalition to Restore Legitimacy in Yemen.

“Tehran must be held accountable for its proxy war in the region and the development of ballistic missiles, regardless of the JCPOA negotiations outcome,” Alireza Jafarzadeh, deputy director of the US office of the NCRI, which is outlawed in Iran, told Arab News, referring to the Iran nuclear accord’s formal name, the Joint Comprehensive Plan of Action.

“This is a very serious threat that needs to be immediately dealt with by Western capitals.

“Missile parts have been provided to Houthis from Iran. There would be no Houthi missile program at all if it weren’t for the Iranian regime. Even if they rename the missiles, the components are produced by the Iran regime to serve its purposes in the region.”

Quds Force units have been ordered by Iran’s Supreme Leader Ali Khamenei to train Yemeni Houthi militants in the use of mines, speedboats, missiles and other weapons in secret Iranian bases. Recruits from Iraq, Syria, Lebanon and African countries are also present in these facilities, according to the NCRI’s information.

Jafarzadeh said that the intelligence on Quds Force proxy naval operations was collected by the NCRI’s sources inside Iran. A key goal of Quds Force naval operations is to target commercial ships in the Red Sea and the strategic Bab Al-Mandab Strait that separates Yemen’s coast from the Horn of Africa, according to the disclosures.

The narrow waterway, considered a vital artery of global trade connecting Europe to the Indian Ocean and East Africa, offers a tempting target for Iran’s terror strategists, according to the NCRI.

Jafarzadeh said the importance given to the Houthis by Tehran is evident from the fact that the group’s representative in Tehran was the first foreign official to be granted an audience with Iran’s new president, Ebrahim Raisi, on Aug. 4 last year.

During the press briefing, the NCRI showed what it called an organization flowchart for the Quds Force’s recruiting, deployment and training of naval terrorists. The Imam Ali garrison in Tehran was described as the central nerve center for its proxy-training activities.

The revelations come amid a sharp rise in attacks and covert operations conducted by Iran’s proxies — the Houthis in particular — against Washington’s Arab strategic partners and Israel.

The new information provided by the NCRI suggest that Iran’s ability to supply drones and ballistic missiles to the Houthis is reliant in large part on Quds Force naval operations.

According to the NCRI, the Ziba Kenar Academy serves as the primary location for naval commando training for the IRGC navy, but its purpose is much bigger than that: It is secretly used by the Quds Force for training proxy fighters.

The inclusion of Iraqi Shiite militants alongside the Houthis is significant given that the Iraqi group Alwiyat Al-Waad Al-Haq, an alleged Quds Force front, claimed responsibility for a failed drone strike on Abu Dhabi on Wednesday. Its only other claim was in January 2021, when it said it launched a drone at Saudi Arabia.

“If Alwiyat Al-Waad Al-Haq came out of hibernation and did launch drones at the UAE … then this was likely an Iran-directed or at very least Iran-tolerated operation,” Michael Knights, of The Washington Institute for Near East Policy, said in a Twitter post.

The Quds Force is synchronizing the activities of its regional proxies so that they can stage operations from multiple fronts — from the north and south — against the members of the Coalition to Restore Legitimacy in Yemen, according to NCRI information.

In other details provided by the NCRI:

* Farur Academy is located on a small island near Qeshm. Five miles wide and 9 miles long, it serves as the headquarters for the IRGC navy commando brigade, Abu Abdullah. Iranian officers under the command of IRGC General Sadegh Amoui train terrorist mercenaries from Yemen and Bahrain here.

* The Quds Force Marine training centers on Qeshm includes an underground stockpile of weapons and various missiles. The Quds Force command in Yemen maintains docks in Iran that are exclusively used by its units for facilitating shipments to their terror proxies in Yemen.

The NCRI also believes that the Quds Force sends weapons shipments to the Houthis via Somalia and Horn of Africa— a route that other independent watchdog groups have accused Iran of employing to illegally move weapons to its Yemen proxies.

The smuggling route through Bab al-Mandab and into the Red Sea has been used extensively in the past by the Quds Force to smuggle weapons to terror proxies in Syria, Gaza and Lebanon to launch attacks against Israel.

The urgency of dealing with the shared security challenges presented by the Quds Force’s proxy naval program has spurred increased security cooperation between Israel and some Arab Gulf countries.

Benny Gantz, Israel’s defense minister, made a surprise visit to Bahrain on Wednesday and the defense ministry announced that he would sign a security cooperation agreement with Bahrain. An offer was earlier made by Israel to strengthen the UAE’s defenses against Houthi missile and drone attacks.

Up until now, the covert nature of the Quds Force terror-training and weapons-transfer schemes has shielded Iran from direct military consequences of the attacks carried out by its proxies.

The NCRI says that weapon deliveries are also made from Iranian ships to smaller Houthi smuggling boats mid-sea in the Gulf of Oman and the Gulf of Aden. The process is more cumbersome but it allows Iran to avoid direct deliveries to Houthis in Yemen’s ports unless highly sensitive weapon transfers are involved.

One of the key ports used by Quds Force to deliver weapons to its terror proxies is Bandar e-Jask. The origin of a massive cache of weapons evidently meant for the Houthis interdicted by the US Navy recently was Bandar e-Jask, according to NCRI sources.

“The implications are clear: Iran’s regime is attempting to cover its tracks as it pursues its shadow agenda,” Jafarzadeh said. “All this should be additional evidence that sanctions against the regime should not be lifted. As US Senator Bob Menendez recently said, there has to be a major turnaround in US policy approach to the regime.”

On Tuesday, Menendez, the chairman of the Senate Foreign Relations Committee, laid out his concerns over the Biden administration’s latest round of negotiations over the JCPOA. “We cannot ignore Iran’s nefarious support for terrorism or accept threats to American interests and lives. … Iran cannot and must not possess a nuclear weapon,” he said in remarks to the Senate.

The rise in drone and missile attacks on Saudi Arabia and the UAE has invited waves of punitive strikes against Houthi military positions in Yemen. However, the Quds Force facilities in Iran — the springboard of these attacks — have remained unscathed.

On Tuesday, the Biden administration said it was sending fighter jets to assist the UAE after the latest attacks, one of which was aimed at a base hosting American forces and followed the Jan. 17 strike that killed three people in Abu Dhabi.

Analysts say the newly revealed identities of key Quds Force officers and locations of their terror-training centers provide valuable additional pressure points against Iran, which so far has paid hardly any price for its malign regional influence and actions even as it drags its feet in Vienna.

“We know what the Quds Force is doing. We know that it uses commercial vessels as stationary command platforms. These platforms need to be intercepted,” Michael Pregent, a former senior analyst for the Defense Intelligence Agency with extensive experience in Iraq and Afghanistan, told Arab News.

“The Biden administration has shown a propensity for defending a regime that uses the Houthi attacks as leverage in the Vienna nuclear talks. It has the capability to respond (to the attacks) but it lacks the will.”