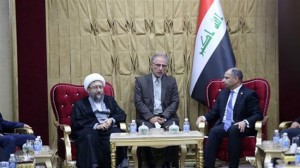 The Iranian Judiciary chief has warned of a plot hatched by some Western and Arab countries to partition Iraq, expressing the Islamic Republic’s opposition to any scheme aimed at undermining the Arab country’s territorial integrity.

“We oppose the disintegration of Iraq and insist on Iraq’s unity and independence,” Ayatollah Sadeq Amoli Larijani said in a meeting with Iraqi Parliament Speaker Salim al-Jabouri in Baghdad on Sunday.

He added that global powers have always used terrorism and imposed wars on regional nations in an attempt to plunder their assets and said such a plot was also hatched for Iraq because it is a rich and populous country.

He further pointed to the ongoing Iraqi military operations to recapture the northern city of Mosul from Daesh militants and expressed hope that the Iraqi people would emerge triumphant in the battle against Takfiri terrorism.

The Iraqi government soldiers, backed by allied fighters from the Popular Mobilization Units and Kurdish Peshmerga forces, launched a large-scale offensive to liberate the strategic city on October 17.

Mosul has been under Daesh control since 2014. The terrorist group has described the city as its so-called headquarters in Iraq.

There are reports that about 50,000 Iraqi ground troops are involved in the Mosul offensive, including 30,000 army troops, 10,000 Kurdish Peshmerga fighters and the remaining 10,000 from police and Popular Mobilization Units.

He added that 747 Daesh terrorists have also been killed and 88 others captured during the mentioned period.

Jabouri, for his part, said Iran and Iraq are standing by each other in the fight against Takfiri terrorism which is abusing the name of Islam.

He added that his country would require more cooperation with Iran in different fields, particularly in the political and social sectors, after the liberation of Mosul and welcomes the expansion of ties with Tehran.

The Iranian Judiciary chief arrived in Baghdad on Saturday at the head of a high-ranking judicial delegation. Earlier on Sunday, he held talks with Medhat al-Mahmoud, the head of the Iraqi Supreme Judicial Council.

A Memorandum of Understanding was signed between the attorneys general of the two countries for cooperation in human rights issues and the fight against terrorism.