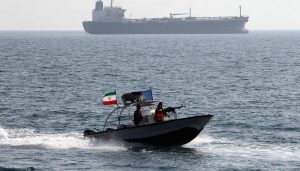 Iran’s Islamic Revolutionary Guards vowed to attack oil exports from the region with Qassem Soleimani, the force commander, issuing a letter backing President Hassan Rouhani’s threat of retaliation against US sanctions, like reported by thenational.ae.

The Iranian leader issued the stark warning that Tehran would not be alone in seeing its oil sales drop should the US force the shutdown, as he toured Europe this week.

“I kiss your [Rouhani’s] hand for expressing such wise and timely comments, and I am at your service to implement any policy that serves the Islamic Republic,” said Soleimani, commander of foreign operations for the IRGC.

The exchange prompted the US military to issue reassurances that the Gulf trade routes would be defended from any attack or Iranian threat.

Capt Bill Urban, a spokesman for the US military’s Central Command, said the US stood “ready to ensure the freedom of navigation and the free flow of commerce wherever international law allows”.

The Iranian leader travelled to Europe in an effort to secure support for its international trade that would shield its economy in the aftermath of the US decision to withdraw from the 2015 agreement.

US pressure on Iran forced the Japanese leader to cancel a planned visit to the country later this month. Prime Minister Shinzo Abe has abandoned plans for what would have been the first visit by a Japanese leader in 40 years during his tour through the Middle East that starts on July 11.

Mr Rouhani met Austrian leaders on Wednesday after a visit to Switzerland that failed to secure hoped-for commercial contracts, including a deal to buy subway carriages for Tehran’s metro.

The visit to Vienna went ahead despite a diplomatic dispute over the arrest of an Iranian diplomat who is the suspected mastermind of a plot to bomb a Paris rally.

Austrian Chancellor Sebastian Kurz demanded “full clarification” from Mr Rouhani of the role of the Vienna-based Iranian diplomat in the plot to bomb an Iranian opposition rally in Europe.

Austrian officials announced they would revoke the legal immunity of Vienna-based diplomat Assadollah Assadi on Tuesday.

Mr Assadi was detained on Sunday near German city Aschaffenburg on a European arrest warrant after an Iranian couple were stopped in Belgium and authorities reported finding powerful explosives in their car.