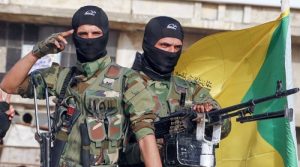 Syrian Observatory sources have monitored ongoing movements by Iranian-backed militias in areas on the Syria-Lebanon border in Rif Dimashq, under supervision and support by the Lebanese Hezbollah, the de facto ruler of this area, as the purchasing of plots of land along the border strip is still on progress, like reported by syriahr.com.

In this context, SOHR activists have confirmed that the Iranian-backed militias have purchased over 320 plots of land in Al-Zabadani and surrounding areas and at least 465 plots in Al-Tufayl border area since early 2021, turning the region into an “independent” village headed by H.D. who is close to the Lebanese Hezbollah commanders.

Moreover, these militias continue taking over luxury apartments and villas in Bludan area and other surrounding areas, bringing the number of villas and apartments these militiamen inhabited in to 231 so far. These practices take place with full support by the Lebanese Hezbollah which facilitating such operations.

It seems that the Iranian-backed militias disregard the Syria’s laws which ban selling or purchasing any land plots in border areas, while media concentration and coverage, by the Syrian Observatory for Human Rights in particular, have not hindered such “suspicious” movements.